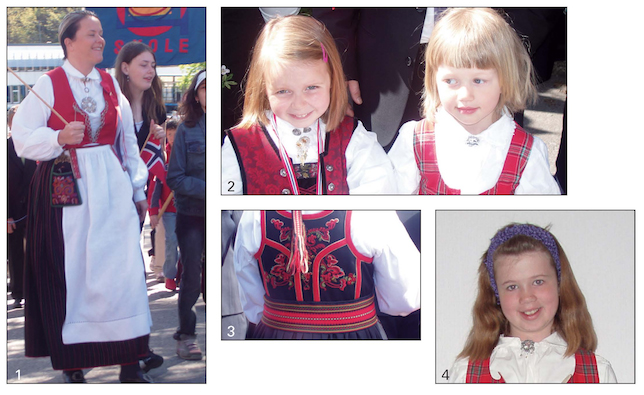 Most of my jewelry is done in a filigree style based in the traditional filigree of Norway. In Norway, each district has it’s own, unique set of ‘National Costumes’ including jewelry specific to each district. The costumes are called “Bunad” and the accompanying silver work is known as “Sølje”. Generally, Sølje is based on a radial, repetitive pattern, and is very specific to each district. I am not a person who does well with repetitive, so I took the basic technique and ran, screaming in another direction! Adding in gemstones, and even asymmetrical/organic filigree design. Like the Norwegian filigree, the wire used is heavier than much of the traditional filigree in other cultures, and is done in sterling silver, though in Norway, it is acceptable to use 830 silver, which is closer to what we call ‘coin silver’. I used some of the basic shapes that you might see in traditional Sølje, but without the radial, repetitive and strict design. I think I would go crazy just making the same patterns over and over again, so I poured my creativity into it.

My jewelry is broken down into two main types. One of a kind, handmade, soldered filigree, where I cut and shape every single little scroll, and solder it with a propane torch, and cast jewelry. Most of my cast jewelry is also filigree, though I have a few models I made after playing with water casting, and folded wax sheet. My casting allows me to make reasonably priced, filigree earrings to go along with my one of a kind pendants and necklaces without having to make two of everything by hand! Below are a few of my own designs. You can see some of the same elements in them as in the Norwegian Solje, but with much more free flowing designs and color/stones.

Casting filigree is an art unto itself. The designs cannot be as complex and free flowing as my one of a kind pieces. They have to be more compact and I have to design with the ‘flow’ of molten silver in mind. In addition, it has to be cast at a much higher temperature than normal. I take the plaster molds out of the kiln at 1150 degree F, where most silver casting is done between 800-1000F. I also use an electric silver melter, and bring that temperature up to just shy of 2000 deg. F. All of this to allow the extra seconds necessary for the silver to flow through multitudes of tiny paths in the plaster mold before it solidifies. Casting does allow me to make a standard production line, but it’s not half the creative fun of my one of a kind pieces! Below are a few examples of my cast work.